When my first book, From Values To Action, was published in 2011,  I told Andrew Youn and Matt Forti that what they were doing by developing the One Acre Fund (OAF) was the best example of “from values to action” that I had ever seen. I told them that my goal was to give values-based leadership talks and seminars once a month to companies, associations, conferences, universities, not-for-profits, etc., and all of my speaker fees and book sales would be donated to the OAF.

Well, as a result of many Kellogg alumni and friends asking me to give presentations during the past 8 years around the world, instead of one talk per month, I have averaged more than 2 talks per week for a grand total of 965 presentations for the One Acre Fund as of September 15th!

One day when I was meeting with Kellogg Dean Emeritis Don Jacobs shortly before he passed away, he asked me how my talks were going, and I told him it was a “win-win” and that, in fact, it was a trifecta:

Dean Jacobs’ immediate reaction was, “Harry, this is not a trifecta, it is a ‘4-fecta’ because it energizes you and you clearly love doing it!!”  As usual, Dean Jacobs was correct! I do love doing it! It gives me the opportunity to spend time with Kellogg alumni and their teams and meet many fascinating people around the world — the “ultimate win-win.”

I mentioned in my last blog post about the opportunity I had to spend time in the Dominican Republic with Max Barr (EMBA 111) and several other Kellogg alums.

Well, the fun continued last week. I gave a leadership presentation in Milwaukee at the Physician Realty Trust Summit on Thursday afternoon.  Mark Theine (EMBA106) is a SVP and clearly focused on developing a strong, national VBL organization.

During my talk, an artist drew a “cartoon map” of my key concepts, which I think does a great job of summarizing the key points! 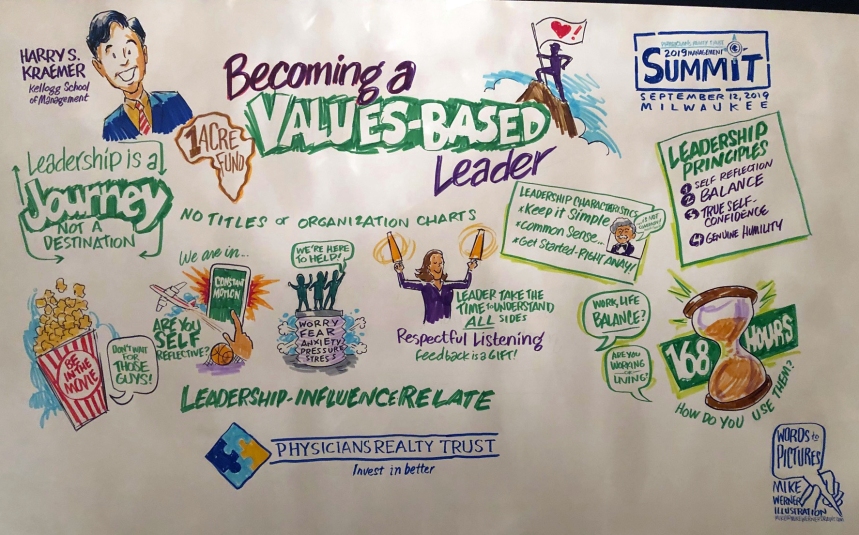 I am going to try to get the original and hang it up in my office!!

Then on Friday I had the opportunity to present at the Young Catholic Professionals Summit in Dallas. Jennifer Baugh founded this organization only a few years ago, and it has already grown to 20 chapters around the country with thousands of members.

I ended the week meeting with some of the folks involved in FOCUS (Fellowship of Catholic University Students),  an amazing organization based in Denver.  I had a chance to spend time with David Trotter, one of the FOCUS leaders.

PS: Well, the work week ended, but that left time over the weekend to participate in one of my FAVORITE occupations — going to a Chicago Cubs game!!! After several weeks of mediocre performance, the Cubbies have won 4 games in a row, and have scored 47 runs in the last 3 games!!! (17, 14, and 16!!!!). We are now only 2 games out of first place with 13 games left to play!!! Go Cubbies!!!