Examples of leadership in crisis…and it must include us!!!

Since the murder of George Floyd in Minneapolis last week, I have had numerous discussions with my Kellogg students both in classes and one-on-one. The words used to describe the horrible tragedy were a combination of shock, disgust, disbelief, anger, frustration and embarrassment. The student questions included:

I don’t know the answers to the first three questions. However, I have several opinions regarding the fourth question. Many people assume that the people that will create the change needed in this country are those usually referred to as “those guys” — some magical group of men and women, somebody else, “certainly not me.” However, as I often mention in my writing, blog posts, and classes, I believe very strongly that each and every one of us is called to be “those guys.” We each need to stop looking for someone else and realize what Mahatma Gandhi summarized so well, “Be the change you want to see in the world.”

I asked the students to provide me examples of people that demonstrated being “those guys”, and I want to share several with you.

The first video shows Chris Swanson, the sheriff in Flint, Michigan meeting with protesters. He takes off his helmet, puts down his baton, and asks the protesters how he can personally help. As the protesters chant, “walk with us!” he embraces one of the protesters, and marches with them in solidarity. It is hard for me to watch this video without getting emotional. This is a true example of a values-based leader; an example that every one of us can learn from.

The second video shows Keisha Lance Bottoms, the African-American mayor of Atlanta, Georgia, the mother of four children, pleading the rioters burning buildings and destroying property to “go home.” She pleads with the crowd: “You are not honoring the legacy of Martin Luther King, Jr and the civil rights movement…If you want change in America, go and register to vote. Show up at the polls….that is the change we need in this country.”

The third video (not yet filmed) needs to consist of each and every one of us. We must reach out to people that are deeply hurt and upset by this terrible tragedy to let them know we care deeply for their pain and that we will “walk with them” each and every day of our lives.

My personal request: Please be the example others need to see in order to be the values-based leaders that we so deeply need during these times and into the future by becoming one of “those guys:” 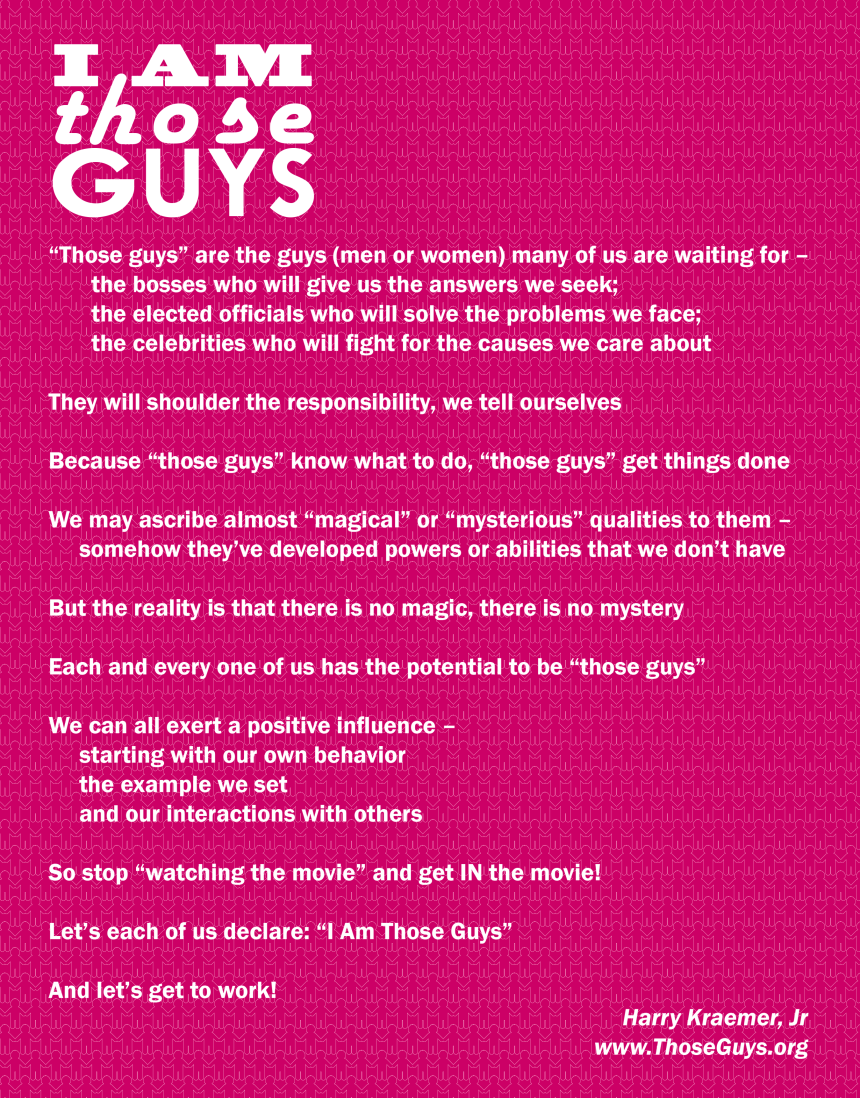