When is it Too Much to Tolerate? If Ever, Now.

Given the craziness of U.S. politics over the past several years, I avoid addressing the topic very often in my writing. This doesn’t mean I ignore what’s happening in our country; frankly, it’s impossible to.  However, I try not to “take sides,” and I strive to look at issues from a “balanced perspective,” seeking to understand ALL sides. I give people the benefit of the doubt and avoid jumping to conclusions. Nevertheless, I recognize that in our increasingly polarized political environment even an attempt at a balanced view can be misinterpreted, and so I tend to keep my opinions on political matters to myself. However, there are times when I simply cannot keep quiet.

Take the current situation with President Trump. Despite his nonstop name-calling and racial and misogynistic comments, I have tried to focus on the fact that, for better or for worse, he is our elected president at least until the end of 2020. However, President Trump’s statements in the past several weeks have made it impossible for me, especially as someone who teaches values-based leadership, to remain silent. The fact that he told four freshman Democratic women in the U.S. House of Representatives (Ocasio-Cortez, Pressley, Tlaib, and Omar) to “go back to where you came from” is totally unacceptable. It is interesting to note that three of these women were born in the U.S., and the 4th is an American citizen. This was clearly a terrible, unacceptable racist comment. However, I resisted making a judgment on whether it was an “unfortunate verbal mistake” by Trump or whether it was truly evidence of a racist ideology, and instead, I sought to evaluate the facts. The fact then that he did not apologize for his statements was STRIKE ONE. The fact that several days later he did nothing to stop his supporters chanting “send her back” in reference to Omar at a rally in North Carolina was STRIKE TWO. The fact that after the rally he posted —

Just returned to the White House from the Great State of North Carolina. What a crowd, and what great people. The enthusiasm blows away our rivals on the Radical Left. #2020 will be a big year for the Republican Party!

— certainly sounded like he was doubling down and endorsing the racism: STRIKE THREE.

When reporters asked President Trump for his reaction to people describing his comments as racist, he replied, “It doesn’t concern me because many people agree with me.” Referring to the four congresswomen, Trump added, “All I am saying is if they want to leave, they can leave now.”

Wow! That says it all. Thank you, Mr. President, for leaving no doubt in my mind where you stand. A Values-based Leader would care deeply about the example they set for the people they lead.

Given the debate over whether the word ‘racist’ applies to President Trump, I thought it would be helpful to remind myself of its definition: 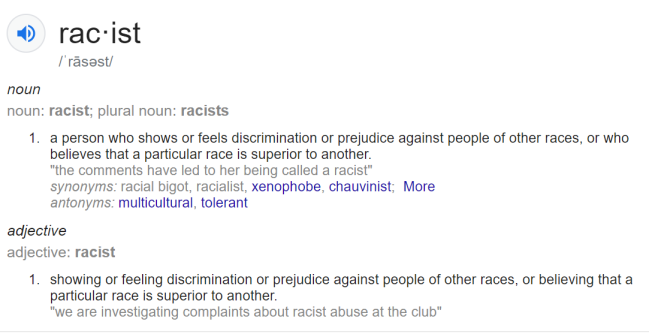 What’s going on? Are our leaders more focused on simply getting re-elected than doing what they stated when taking the solemn oath of office? Where are the values-based leaders that stand up for what is right? How can we, as Americans, make clear to our leaders that their behavior is inconsistent with our beliefs of “one country, under God, with liberty and justice for all!!!!” And think of the example they are setting for all Americans.

I find it remarkable that despite his overt racism, Trump’s approval ratings have actually increased!! Is it really possible that more than 40% of the American population believes this behavior is appropriate??!

What does this all mean? Well, if we are truly “those guys” — that is, men and women who want to make a positive difference in the world — I believe we have a responsibility to let our current leaders know that this is unacceptable and that they will be replaced in our democratic process with values-based leaders who act and lead consistently with what we stand for as Americans.

One final comment: The acts of terror committed by white supremacists in Texas and Ohio last weekend cannot be dismissed as being disconnected from the rhetoric and behavior of President Trump. Our nation is hurting, and whether he likes it or not, as President, Trump has a duty to help heal and unify our country for people of all races and creeds — at least until 2020, that is.